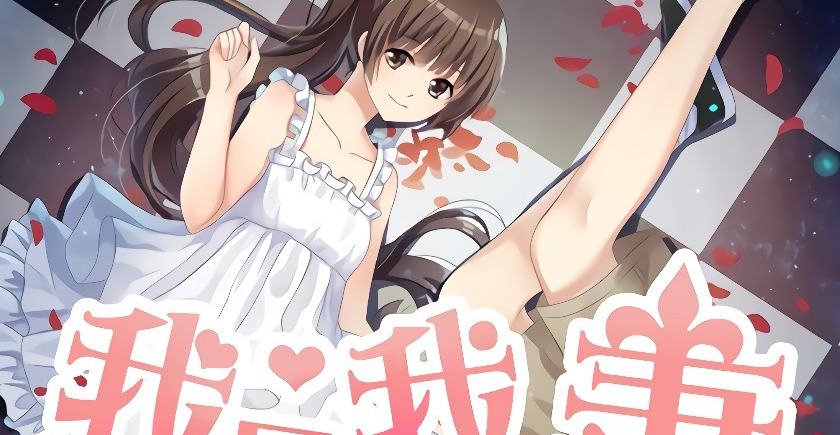 The second school bell rang after the fourth lesson. The two people who were immersed in their own world came back to reality.

The students who just finished their P.E. class, obviously didn’t have the strength to go to the school canteen right away. Those students chose to walk there slowly. Usually after the fourth class was over the students would rush to the canteen.

The male students exercised through the entire P.E. class, this time their whole bodies were covered with the stench of sweat. None of them had an appetite, they’d only have their lunch with a few snacks.

Although they’d rested a lot after their run, the girls’ physiques were still very weak and the energy in their bodies still hadn’t fully recovered. In result, they still didn’t want to move.

“The canteen must be very crowded by now…..” Jin Jing said while she reluctantly stood up.

Ye Wen nodded her head and looked towards the canteen. It seemed to have a long row of students and is very crowded.

“Let’s just go!” A girl with a small round face suggested.

This was the girl that is ranked third among the beauties in their class. She’s a beautiful small girl with a small round face, but of course, she couldn’t be compared to Ye Wen’s cute baby fat….

Her name is Lu Yu, a very cute girl in Ye Wen’s past memories. She seems to be a member of the sports committee with Wang Xin, a very lively and cheerful girl but also one of Jin Jing’s best girl friends.

At the moment, only Jin Jing, Lu Yu, and Ye Wen didn’t leave the sports field. They waited a while before deciding to go to the canteen, reckoning that there wouldn’t be enough time for lunch.

By the time they arrived, only a few high school students remained in the canteen. Since most of the high school students need to pay for their meal, their family can’t afford to give them additional pocket money, so the students only occasionally buy a meal. Compared to the rich students who can afford to eat there every day…… it would be too much for them.

Wen Lan Academy is not a school for the rich. In this day and age, it wouldn’t matter but Wen Lan Academy has a strict bottom line; if you want to enroll, you have to pass the examination.

Most of the people still inside the canteen were their fellow classmates, chewing the snacks they’d bought.

“It’s my treat!” Ye Wen said with a rich and imposing manner as she reached into the pocket of her purse, “Don’t be polite!”

The purse in her hand was filled with a 100 yuan bills! In this year, 100 yuan for the students is a large sum of money. Even if you’re going to spend it with three people. Basically, she could buy anything in the canteen.

“Nevermind, I have some money.”

“It’s fine, after all, we are friends and friends should treat each other!” Ye Wen hurriedly said thinking that it would be a good thing if they got closer to each other.

“Not enough? Don’t be shy.” Ye Wen took out a red colored bill from her purse and passed it to them. [2]

“Wow~ so rich!” Lu Yu exclaimed, “a piece of bread would be enough, I’m afraid I won’t be able to eat it all.”

“Well, that would be fine.” Jin Jing added.

In this period of time, the instant noodle market hadn’t become prosperous yet because of it’s flavorless taste and shrimp noodles are regarded as a relatively new taste.

In ten years, the production of instant noodles will be enormous….. Ye Wen sighed in her heart, she remembered the instant cup noodles that were filled to the brim and became popular instantly. The floss bread became much bigger, and will only cost about 5 yuan….. [4]

The three girls sat beside the canteen’s window and started to eat. Lu Yu and Jin Jing sat opposing Ye Wen. Her small mouth nibbled the soft bread. The afternoon sun shined obliquely through the window, the clear sunlight embraced their bodies. The boys sitting across them were dazzled by the sight.

Perhaps this scene would turn into their most memorable experience in their entire high school life.

Absent-mindedly, Qiu Yi hastily gulped down two mouthfuls of cooked rice and went towards the canteen. Finding Ye Wen there, his appetite revived.

Qiu Yi touched his empty stomach, he didn’t eat much earlier. He entered the canteen without delay.

“Fortunately, I still have some money left…..”

Qiu Yi entered the canteen, settled himself beside the windows and leisurely watched the girls eating their lunch. The bright sunshine that shone on their faces was dazzling.

Qiu Yi’s eyes swept across the view and rested on Ye Wen’s figure.

[I always have this feeling…. that she has a different temperament from the others, she’s like a magnet, that attracts others on her own. Qiu Yi, in the middle of his thoughts, stood there motionless, seemingly enlightened.]

Ye Wen ate a mouthful of noodles then she saw Qiu Yi standing in front of the window. Curious about his dazed look, she asked: “What’s wrong? You don’t have any money?”

After all, he’s still me, so I’ll take care of him. If he doesn’t have any money, then I don’t mind to invite him to eat lunch with us.

Speaking of which, in this time the high school has a rare amount of stores. From her memories, it’s the very least she can recall.

Qiu Yi’s family isn’t rich, it was only after 10 years that they’re considered to be well-off. But before that, their family has always been frugal.

Suddenly being caught by the girl he was watching, Qiu Yi immediately became embarrassed and said some incoherent words.

“I see….” Ye Wen is, after all, an experienced person, she found that her past self was really cute being shy, and cannot help but open her mouth, “Well then, don’t be shy, come here, sit beside me.”

“What is it?” Ye Wen’s eyes locked on the boss of the canteen and she waved her hand, “Boss, give him a cup of suan cai noodles, a piece of floss bread, and a bottle of iced tea. [5]

The boss was puzzled, “What kind of flavor is the suan cai noodles?”

“Ah!” Ye Wen wiped her sweat, she accidentally blurted out her favorite flavor of noodles in 10 years from now. Quickly she corrected herself, “No, that’s wrong! I said beef flavored noodles!”

The boss was still doubtful deep down, what is that new kind of taste… Of course, for now, it would be impossible to find that in the present market.

Seeing Qiu Yi still standing, Ye Wen rolled her eyes and said: “Come over here, I bought so many, do you want me to eat it all myself?”

Qiu Yi blankly nodded his head and sat on a chair next to Ye Wen.

Jin Jing and Lu Yu whispered to each other. From time to time, they would look at the two and snicker.

Ye Wen found it strange that they were laughing, but she felt more amused by Qiu Yi’s embarrassment.

Qiu Yi stayed motionless for a long time. Stunned that he didn’t open the cup of instant noodles yet, Ye Wen waited a while only to realized that he wouldn’t eat. So she gave up on persuading him.

I wasn’t this cowardly before! This guy isn’t me! Ye Wen tried making excuses for herself.

How much more can you want?

3. 李子/园 – li zi/yuan, literally translated as plum garden, the Li Ziyuan you read was a famous brand of milk in China and 虾/板/面 – xiā há/bǎn/miàn, literally translated as shrimp, block, noodles, it is a flat noodle dish that originated from China and was popularized in Malaysia, Taiwan, and Singapore, consisting of handmade noodles served in soup. If you want to search it just type the name of the noodles “Banmian”. In this sentence, what Ye Wen was talking about was the type of instant noodles of that banmian.

4. 10 years ago was referring to her time in the past.

5. 酸菜 – suān cài, also called as Chinese sauerkraut is a type of pickled cabbage, it is a unique form of “pao cai” that was also a pickled cabbage where the “kimchi” originated from.